The next major release of Reaticulate is now available. Users of both the pre-release and stable ReaPacks will automatically receive this update.

Although this release includes many new features and workflow improvements, the bulk of the work has been on a significant internal overhaul of how the main UI script interacts with the per-track Reaticulate JSFX instances. This isn't something directly visible to users, but it opens the door to many new features and improvements that weren't previously possible, some of which are now available in this release.

When notes are selected in the MIDI editor and an articulation is inserted (e.g. by right- or double-clicking an articulation in the UI), program change events can now be added at the first note of any contiguous subset of selected notes.

The channel of the program changes will also match the notes they are being inserted under, rather than the default channel picked from the channel rows in the UI.

When no notes are selected, or when the MIDI editor is closed, articulations will continue to be inserted at the edit cursor.

This new behavior is currently optional while we get a better sense of how it should mature over time, and can be enabled or disabled from Reaticulate's Settings page. It's enabled by default.

Output events, bank assignments on tracks, and generally anywhere destination channels could be specified can now optionally include a MIDI bus number as well.

Output events can target different buses by adding .<bus> to the channel descriptor. As with channel numbers themselves, if the bus isn't included, then the bus chosen for the destination channel when the bank is assigned to the track will be used.

Here are some examples: 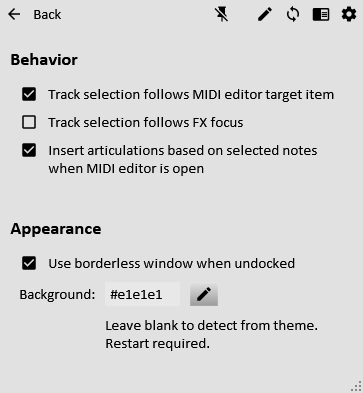 Reaticulate now handles light Reaper themes much better, ensuring text and icons are higher contrast. Theme background color detection has been fixed on Mac, and there is also now a setting to configure a custom background color.

Undocked windows can now be borderless, provided a sufficiently recent version of the js_ReaScriptAPI extension is installed. This option can be enabled in Reaticulate's Settings page. (The option will not be visible if js_ReaScriptAPI is too old or not installed.)

In addition to right-clicking, articulations in the UI can now be double-clicked to insert articulation changes into MIDI items.

Finally, previous versions did not respect Undo with articulation insertions. This has been fixed with 0.4.0, so articulations inserted into MIDI items can be reverted with Reaper's normal undo facility.

All the new features described below are fully documented on the Bank Files page.

Four new articulation attributes have been added to perform basic transforms to incoming notes after the articulation is activated:

Here are some examples:

A new pitch output event has been added to send pitch bend MIDI messages when articulations are triggered. Values are between -8192 and 8192.

Use Previous Routing for Output Events

A special channel value of - (dash) will send the output event to the destination channel(s) set up by the previous articulation. Future incoming MIDI events for performance will continue to be routed to those channels.

A new spacer articulation attribute allows visually separating groups of articulations. Articulations with this attribute will be shown in Reaticulate's UI with spacing above. The value indicates the degree of spacing, but 1 is generally a good default. 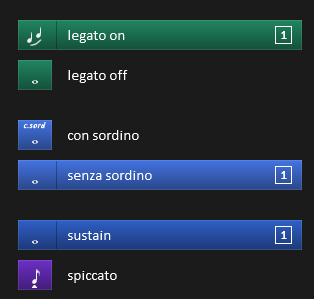 This is release fixes a regression introduced in 0.3.0.

This is a small bug fix release, mostly to fix a nontrivial regression introduced in 0.3.0.

This release of Reaticulate focuses on general usability improvements and knocking down those little workflow irritations. Apart from that, there are quite a number of internal structural changes that you don't see, but will help pave the way for future releases.

For those who installed Reaticulate via ReaPack, the updates should come automatically in time, but you can force the update by accessing Extensions | ReaPack | Synchronize packages from Reaper's menu.

After the update, you should restart Reaper to ensure the latest version of all Reaticulate scripts are running.

After a longer-than-expected development cycle, I'm happy to release the next alpha version of Reaticulate.

I'm hoping the next major release will be beta worthy. The main release criteria for beta is a GUI editor for creating and modifying banks.

Unfortunately due to significant backward-incompatible changes in the ReaPack structure, upgrading requires uninstalling the old version and installing the new one.

I did warn you this was alpha software, right? :)

It's a good idea to save backups of your projects before resaving with Reaticulate 0.2.0 just in case you find yourself needing to downgrade to Reaticulate 0.1.0.

If you do realtime performance of your MIDI CCs using a control surface that supports incoming feedback, such as a MIDI Fighter Twister or iCON Platform-M, it's possible to have Reaticulate-managed tracks sync their current CCs back to the control surface, either on track select or during playback.

There are some new actions to control this behaviour, including to enable or disable it, or to do a one-time dump of current CCs to the control surface. 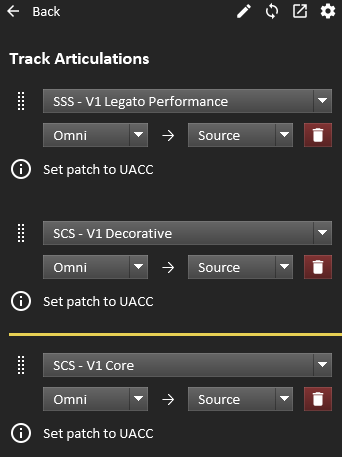 One of the most requested features was the ability to insert program change events in MIDI items without the need to open the MIDI editor and enable step input. This is now possible by right clicking an articulation in the list.

Banks in the track configuration page can now be reordered via drag and drop (depicted right) rather than the cumbersome up/down buttons in the previous release.

The Settings Page now has an option to autostart Reaticulate when Reaper starts. This works by modifying Reaper's special __startup.lua script to invoke the Reaticulate_Start action.

There are a few other little odds and ends improving usability. For example, if the Reaticulate UI panel has focus and the spacebar is hit, it will toggle transport play/pause and move focus back to the arrange view (or MIDI editor if it's open). Unfortunately there's no way to solve this problem in a general sense (passthrough keystrokes to the arrange window) but play/pause was the single biggest workflow killer for me, so hopefully you find it helpful too.

All these new features described below are fully documented on the Bank Files page.

This bank models a patch that has separate keyswitches for legato on/off and con sord on/off, which are placed in different groups. You can activate them independently, but the all-in-one long on program 1 references the other articulations to provide a convenient, er, all-in-one articulation.

When you activate it, the GUI will automatically update to reflect the legato and sordino states.

Previously, if Reaticulate observed any CC then it would chase it. This ended up doing frustrating things, such as zeroing out CC 7 (volume) at unexpected times.

Now banks can specify which CCs should be chased. The factory banks have been updated accordingly. And now by default, unless a bank specifies a CC list, only CCs 1,2,11,64-69 will be chased.

Sometimes you just want an articulation to fire a MIDI event to a specific channel but not have future non-articulation events get routed to that channel.

This is now possible by prefixing the output event type with a -. For example:

It's now possible to have output events emit only if another articulation is active. We call this a filter program and it requires that the filter program be activated in another group on the same channel, otherwise the output event will be filtered (i.e. not emitted).

Filter programs are optional, and are specified by appending %program to the output event spec.

Here when activating the long articulation, only one of the output events will be emitted, depending on the state of group 2.

If one of the mute types in group 2 is changed later, Reaticulate understands that it must retrigger program 1 and emit the new note output event on the other channel, and redirect future MIDI events to that channel.

The standard caveat of using multiple groups with Reaticulate applies: Reaper will only chase the last program on each channel, so if you have a MIDI item with e.g. program 120 followed by program 1, and you manually activate program 121, when you begin playback again, depending on the playhead position, program 120 may not be refired.

In spite of that limitation, this new ability to filter output events based the state of other groups provides a lot of interesting capabilities.

There is now the beginnings of a user manual on the Usage page. It's a bit information-dense right now but I intend to polish it up over time.