Before we get into it, Seventh Sam has provided an excellent blog post on how to use Reaticulate, offering a more accessible introduction to Reaticulate's usage than this page, which is more comprehensive but also more technical.

So we recommend you read Seventh Sam's blog post first, and then come back here to fill in the missing pieces.

Let's first get some terminology and basic operational stuff out of the way:

In order for Reaticulate to work on a track, you must first load the Reaticulate FX plugin at the top of the FX chain. The job of the Reaticulate FX is to translate program change MIDI messages (as emitted by Reaticulate's GUI) to the appropriate MIDI needed by the virtual instrument on that track to switch articulations.

During live recordings, when articulations are activated Reaticulate will inject the Program Change event into Reaper's Virtual MIDI Keyboard queue, so in order to ensure articulation changes get recorded, be sure to configure the track to input from All MIDI Inputs while recording (right click on the Record Arm button on the track and select Input: MIDI | All MIDI Inputs | All Channels (or any specific channel of your choice) from the menu.

A bank (i.e. articulation map) is a collection of articulations that generally describes a multi-articulation patch of a virtual instrument. A track can contain a number of banks provided there are no conflicting articulations (program numbers) between banks assigned to the same MIDI source channel (see below) on a given track.

Once added, each bank has a few UI elements:

Banks for a number of existing VI libraries come bundled with Reaticulate. These generally work out of the box with the patch, or require minimal tweaks to the patch which will be indicated in a message when you add a factory bank. (For example, banks for Spitfire libraries usually require setting the patch to Locked to UACC.)

You can use these to get started, but of course you're almost certainly going to want to roll your own.

Currently there is no GUI for creating custom banks. This will be coming in 2022, but for now unfortunately it means some manual text editing will be necessary to configure banks. Click here to learn how to create your own custom banks for Reaticulate.

You can also download user-contributed banks for various libraries.

Hopefully the GUI will be fairly intuitive. Here are some tips that may not be obvious: 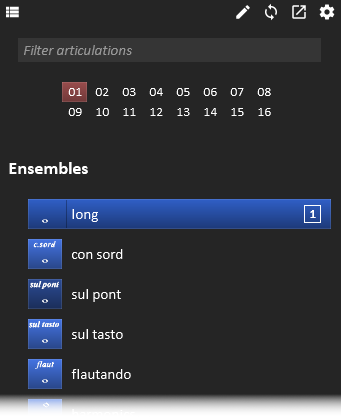 Reaticulate installs a number of Reaper actions that you can bind to keyboard shortcuts or MIDI controller events. Most of the actions are designed to make Reaticulate usable from a control surface or tablet (e.g. running TouchOSC or Lemur).

All actions are prefixed with Reaticulate so you can easily find them by searching for Reaticulate in Reaper's action list.

(Prerelease) Note: if any of the "Activate" actions are triggered twice within 500ms of each other, the articulation will be inserted into the MIDI item at the edit cursor (if one exists). This allows you to use the same actions from, say, a control surface to both temporarily enable articulations and insert them into current items.

Reaticulate is able to send articulation changes and CC values to a control surface or other MIDI controller:

If multiple tracks are selected, then the first selected track will be synced to the control surface.

This is implemented by means of a hidden track called "MIDI Feedback (Reaticulate)" and which the Reaticulate JSFX installed on the track communicates with via MIDI bus 16. Consequently, if you enable this feature, you won't be able to assign banks to tracks on bus 16 (or use banks with output events that explicitly address bus 16).

Feedback is only sent to the control surface when the selected track is both armed for recording and monitoring for input on a MIDI device.

The Bank Select is a 14-bit event indicating the MSB and LSB of the Reaticulate bank the selected articulation belongs to. (In practice, this means two events: CC0 with the MSB value, and CC32 with the LSB value.)

The group number is communicated using a custom event: a MIDI note off (0x80) for note 0, where the note-off velocity represents the group number offset from 0 (i.e. value 0 means group 1).

MIDI controllers that send CCs can sometimes also receive those same CCs and use those values to set the controller's current state. There are many devices with this capability, but some examples are:

Many control surfaces with motorized faders (such as the one depicted right) can be configured such that the faders transmit MIDI CC values and can receive CCs back to move the faders to the new values.

Even if your control surfaces lacks a custom mode to work directly with CCs (and supports only e.g. Mackie Control Protocol [MCP] or HUI), if you're particularly enterprising, it's possible to shim a translation layer between Reaper and the controller. For example, with a control surface supporting MCP, software such as Bome MIDI Translator Pro could be used to translate between CCs on the DAW side and pitch bend messages (used by MCP) on the control surface side.

Similar with articulation groups above, the custom event is defined as a MIDI note-off (0x80) for note 1. The event's channel indicates the new default Reaticulate channel. The note-off velocity is not significant.

You almost certainly want to leave this set to 1, in which case the CC events sent to the control surface are standard MIDI.

More esoteric custom configurations may benefit from using a different MIDI bus for the outbound CCs. When a bus other than 1 is used, Reaper will output SysEx MIDI events like this: